Text-to-image has advanced at a breathless pace in 2021 - 2022, starting with DALL·E, then DALL·E 2, Imagen, and now Stable Diffusion. I dug into a couple of papers to learn more about the space and organized my understanding into a few key concepts: 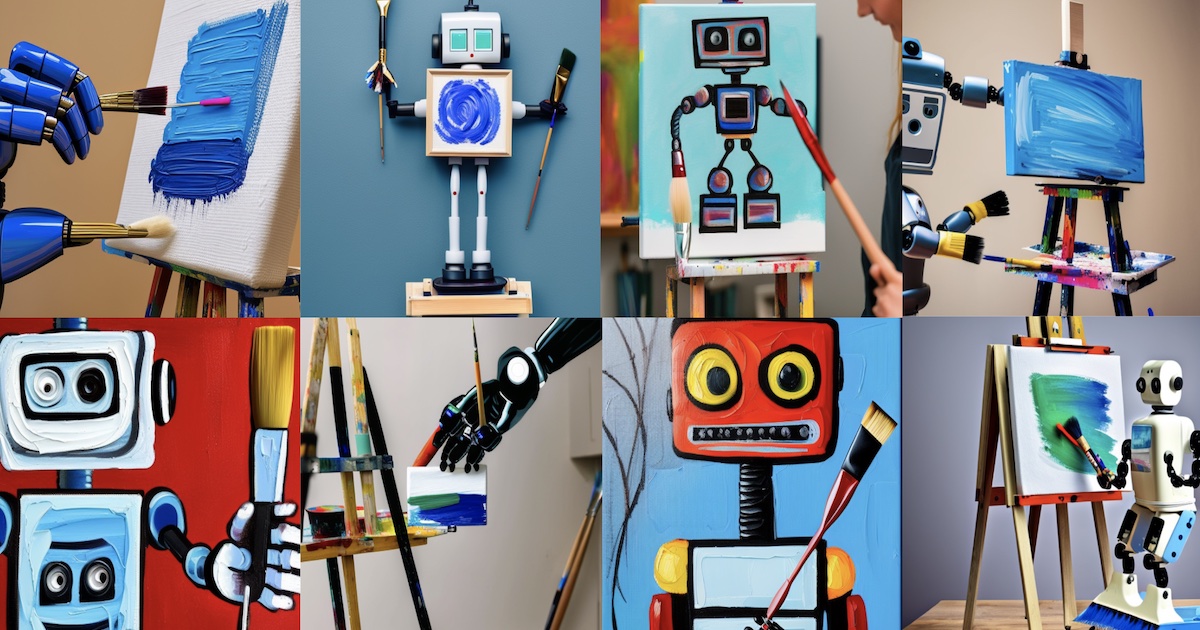 Diffusion: From data to noise and back

Let’s start with the earliest diffusion paper I know, cryptically titled “Deep Unsupervised Learning using Nonequilibrium Thermodynamics, by Sohl-Dickstein in 2015. In it, the authors explained that the idea of diffusion was inspired by non-equilibrium statistical physics (perhaps the particle physics concept with the same name?)

To implement forward diffusion, they apply a Markov chain that progressively adds Gaussian noise to the data until the signal is destroyed (i.e., complete noise).

They shared an example of diffusion on 2d Swiss roll data. Forward diffusion (top in blue, left to right) gradually adds Gaussian noise until the data is pure noise. Reverse diffusion (middle in red, right to left) gradually denoises the data to get back the 2d swiss roll. 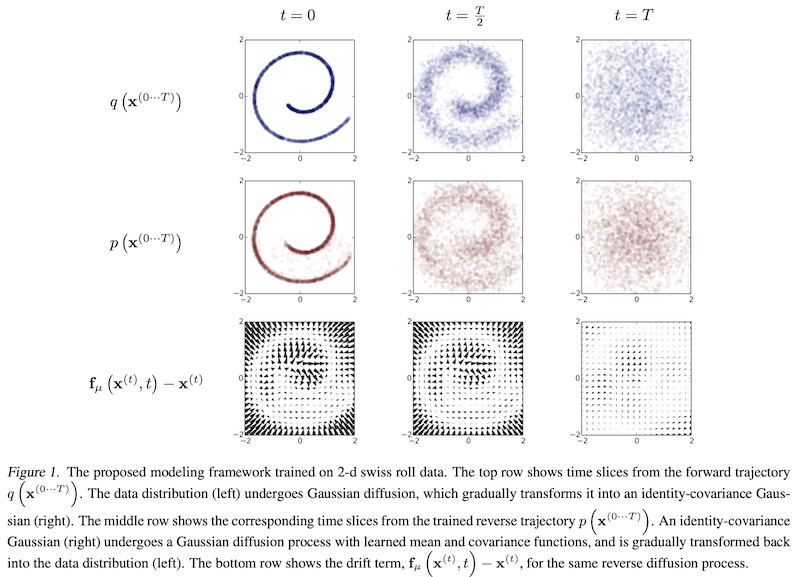 If we knew the conditional distribution of \(p(x_{t-1}\vert x_{t})\), we could just run the forward diffusion process in reverse: Sample random Gaussian noise (\(x_{t}\)) and denoise it to get a sample image from the real distribution.

Unfortunately, we don’t know \(p(x_{t-1}\vert x_{t})\) as it’s intractable—it requires knowing the distribution of all possible images to compute the conditional probability. Thus, we train a model (i.e., neural network) to learn the conditional probability distribution \(p_{\theta}(x_{t-1}\vert x_{t})\), where \(\theta\) are the model parameters. 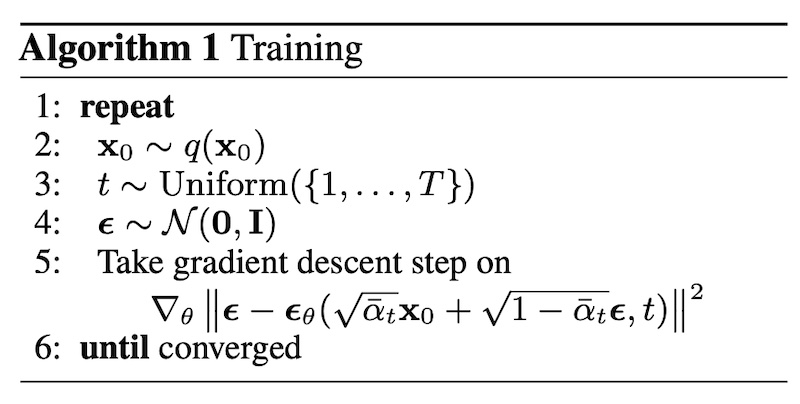 Here’s a step-by-step of the training algorithm:

When we have a trained model, here’s how to generate new images starting from noise:

I was curious about these noise removal and addition weights and coded up a DDPM to tinker with it. To my surprise, the noise removal weights are as low as 0.01 to 0.02 while the noise addition weights go as high as 0.14. Remember the intuition that estimating small amounts of noise for multiple timesteps is more tractable than estimating all noise via a single timestep? This is how it’s implemented in the algorithm and code.

Via experimenting with the DDPM, I learned that more timesteps had a positive impact on sample quality though it also required more epochs and a large timestep embedding. Larger dimensions for the timestep embedding also improved loss and sample quality. On the other hand, more epochs, different loss functions, and batch size didn’t help. (Want to understand diffusion better? Clone this GitHub repo and play with the code!)

So far, these models are only capable of basic diffusion (i.e., generating images from noise, limited by the dataset they’re trained on). They are unable to generate images from text prompts (unlike DALL·E and Stable Diffusion)—to do this, we need text conditioning.

(Aside: I thought the approach of corrupting input with noise and learning to remove the noise was similar to denoising autoencoders and wrote a brief comparison.)

To understand text conditioning, I think it helps to start with Contrastive Language-Image Pre-training (CLIP; 2021). It embeds text and image in the same space via a projection layer. Thus, it can efficiently learn visual concepts, in the form of text, via natural language supervision and perform zero-shot classification.

This is implemented via a linear projection to map each encoder’s representation to the multi-modal embedding space (lines 13 - 15 below). As a result, the text and image embeddings are now in the same space. Thus, given a text embedding, we can apply k-nearest neighbors to find similar images.

For zero-shot classification, all the dataset classes are converted into captions such as “a photo of a <class>”. Then, CLIP is used to predict the class that best matches the image.

CLIP was quickly followed up by DALL·E (2021), one of the first text-to-image generation models open to the public—this is our first example of text conditioning.

At a high level, DALL·E starts by compressing images into 8,192 discrete tokens in a visual codebook (\(\mathcal{Z}\) in the image below). These image tokens can then be concatenated with text embeddings. The combined embedding is then fed into a transformer which learns how to predict the image tokens given a text embedding.

Example of a visual codebook from the VQGAN paper (Note, this is not DALL·E; source)

Why compress images into tokens in a codebook? The authors explained that using pixels directly as image tokens would require too much memory for high-resolution images. As a result, model capacity is spent on high-frequency details (i.e., pixels) instead of low-frequency structure (i.e., lines) that make images visually recognizable. (This is the same reason Stable diffusion encodes images into the latent space before running diffusion.)

First, DALL·E trains a discrete variational encoder (dVAE) to compress 256 x 256 images into 32 x 32 image tokens (vocabulary size = 8,192). The parameters of the dVAE are then frozen when training the transformer.

Next, image captions are lowercased and truncated to a max length of 256 tokens before being encoded (vocabulary size = 16,384). The image tokens are then concatenated after the text tokens (example below).

Example of concatenated text and image tokens in DALL·E (source)

Finally, an autoregressive transformer (i.e., predict the next item in a sequence) is trained to learn the joint distribution over the text and image tokens. The transformer is decoder-only, where each image token can attend to all text tokens earlier in the sequence.

To generate images from text, the text prompt is embedded and fed into the transformer. The transformer then generates the sequence of image tokens. Finally, the dVAE decodes the image tokens to return a 256 x 256 image. 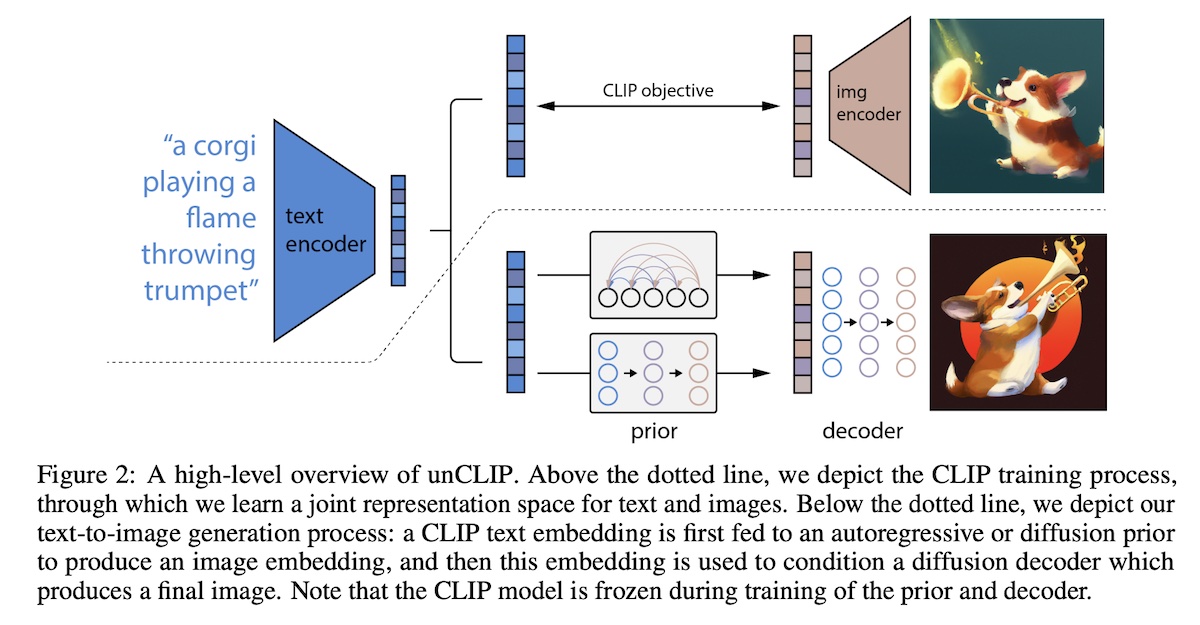 The paper shared two approaches to learn the prior: autoregressive and diffusion.

For the diffusion approach, they trained a decoder-only transformer with a casual attention mask on a sequence of encoded text, text embedding, time step embedding, noised CLIP image embedding, and final embedding. The final embedding’s output is then used to predict the unnoised CLIP image embedding. Interestingly, in contrast to DDPM, they found it better to train the model to directly predict the unnoised image, instead of predicting the noise and then subtracting from the noisy image.

The latter shows one way text conditioning can be applied to diffusion. The transformer attends to the text information in the sequence and uses it to predict the final output.

It works because extremely large language models (LLMs), by virtue of sheer size, can still learn useful representations despite not being explicitly trained on text-to-image tasks. The benefit is that LLMs can learn on a text-only corpus which is easily larger than image-text datasets. Furthermore, they found that scaling the text encoder size is more impactful than UNet size in image-text alignment and image fidelity.

Imagen does text conditioning by first tokenizing the input text and encoding it via the T5 encoder. The encoded text then passes through a pooling step (image below). 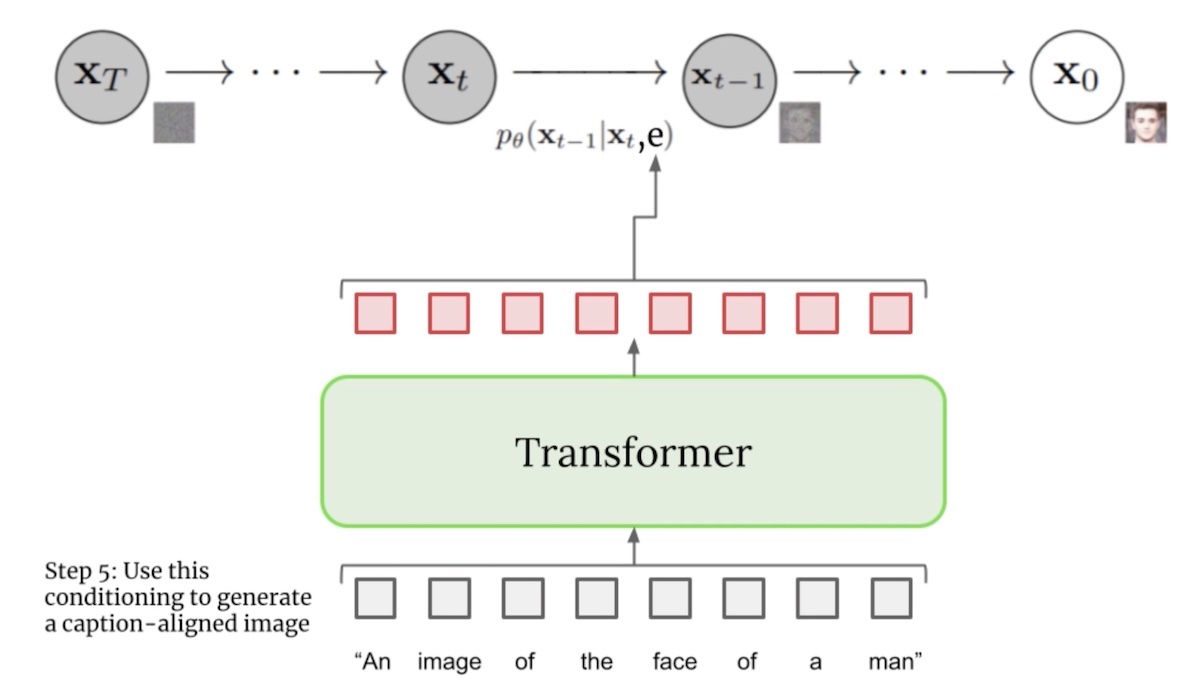 Encoding text via the T5 transformer in Imagen (source) 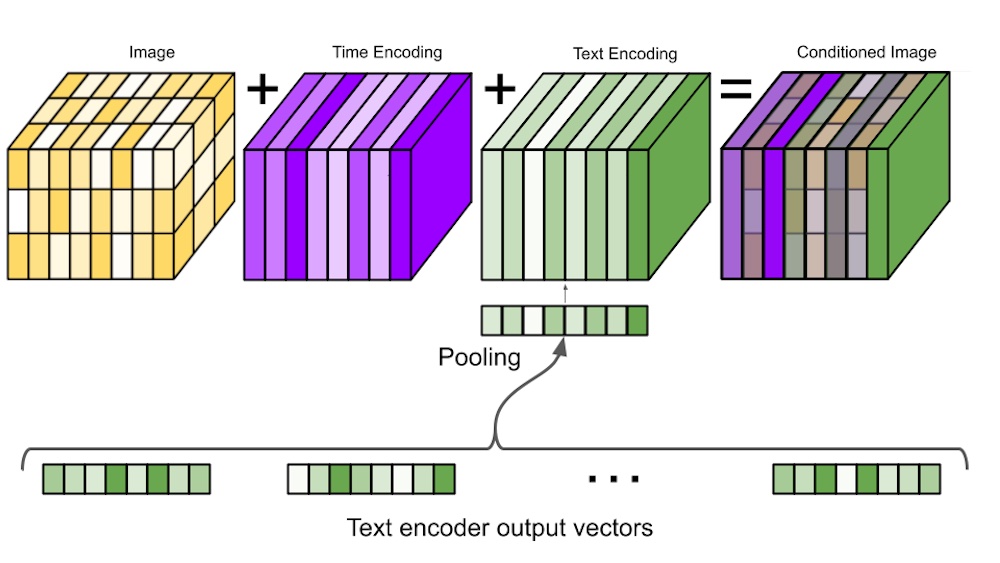 Conditioning on time and text embeddings in Imagen (source)

The text embedding (green and red boxes below) is used throughout the image generation step. First, it’s used to generate the initial 64 x 64 image from noise (blue box). Then, it is used to increase the image resolution to 256 x 256 and then 1,024 x 1,024 (yellow boxes). 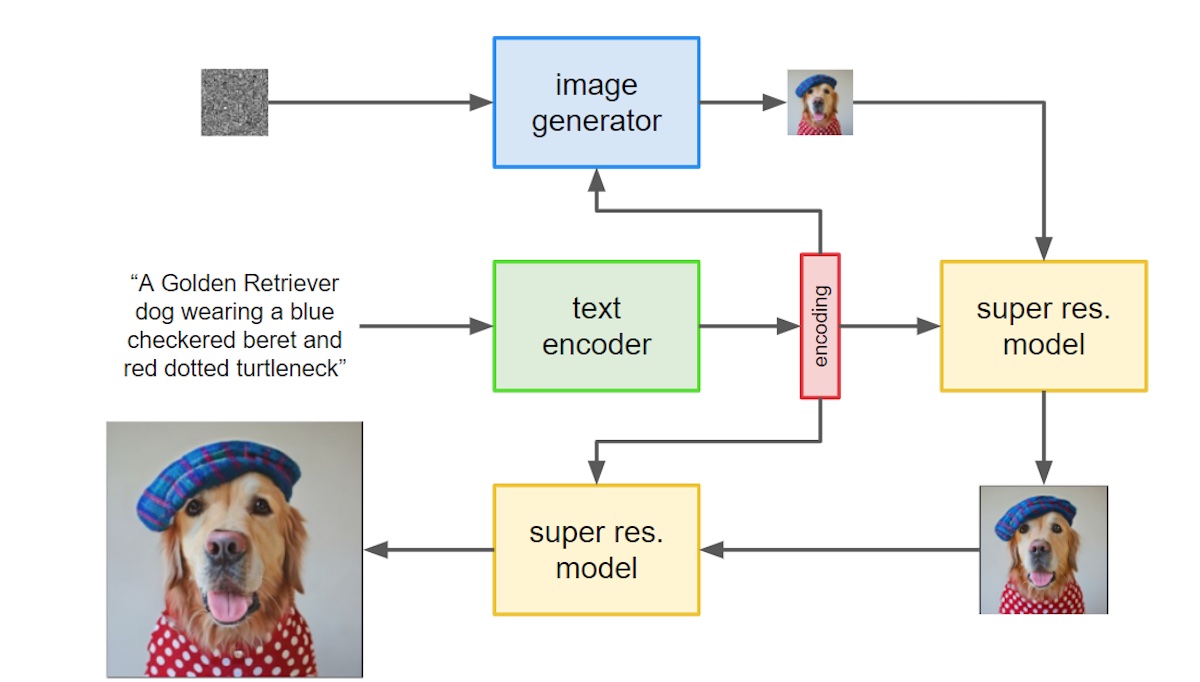 Guidance is a technique to explicitly incorporate image class—or text prompt—directly in the diffusion process. (This is the often tweaked guidance_scale hyperpameter.)

The classifier-guidance paper (2021) noted that GANs relied heavily on class labels, often via class-conditioned normalization or discriminators with heads designed to behave like classifiers. This suggests that class information is crucial to the success of GANs for generation. So, to take a leaf from GANs, they use a classifier \(p_\phi(y\vert x)\) to improve image generation via diffusion.

(Note: For simplicity, I’ve dropped the \(t\) variable in the equations. In practice, text-to-image diffusion is also conditioned on time step which indicates the level of input noise.)

To achieve this, they train a classifier (\(p_\phi(y \vert x)\)) on noised images (\(x\)) and then use the gradient (\(\nabla_{x} \log p_\phi(y \vert x)\)) to guide the sampling process towards the class label (\(y\)). To produce noised images, forward diffusion is applied on ImageNet with random crops to reduce overfitting. The classifier adopts the downsampling truck of the UNet, with pooling on the 8 x 8 layer to produce the final output.

However, classifier guidance is impractical as the classifier needs to be trained—from scratch—on noisy images. I.e., we can’t use a pre-trained classifier.

Thus, classifier-free guidance (2021) was proposed. Instead of training a separate classifier, it trains a conditional diffusion model (\(p(x \vert y)\)) with conditioning dropout. Some proportion of the time, the conditioning information (i.e., image caption) is replaced with a null token. This is simple to implement and does not complicate the training pipeline or increase model parameters.

“A stained glass window of a panda eating bamboo”: No guidance (left) vs. CLIP-guidance (middle) vs. classifier-free guidance (right) in GLIDE (source)

To be clear, DALL·E, DALL·E 2, and Imagen apply classifier-free guidance too. DALL·E randomly drops the text-conditioning 10% of the time while DALL·E 2 randomly sets the text embeddings to zero and randomly drops text captions 10% and 50% of the time. Imagen randomly sets text embeddings to zero for 10% of training instances. In the space of text-to-image diffusion, classifier-free guidance (aka conditioning dropout) is now as essential as dropout for regularization.

That said, it was another development that allowed regular users to hack text-to-image diffusion on their laptops—departure to latent space.

Latent space: Diffusion on latents instead of pixels

Stable Diffusion (2021) differs from the previous diffusion models by working in the latent space instead of pixel space. It first compresses images via a variational autoencoder (VAE) into a more efficient and lower dimensional latent embedding. Next, the diffusion model learns to generate latent (i.e., compressed) representations of images which are then decoded into images via the VAE decoder.

Similar to DALL·E and its visual codebook, latent space is motivated by the observation that most pixels in an image are imperceptible details that are semantically meaningless. However, because regular diffusion models are trained and evaluated in the pixel space, it leads to unnecessary computation and thus costly training and inference. Thus, the paper proposes diffusion on compressed images where the imperceptible details are excluded.

In Stable Diffusion, the VAE encodes noised images (via \(\mathcal{E}\)) into a low-dimensional latent representation which is fed into the UNet. It then decodes UNet-generated latent representations (via \(\mathcal{D}\)) into human-understandable images. The VAE has a reduction factor of 8, where the original image pixel space of 3 x 512 x 512 is encoded into latent space of 6 x 64 x 64, thus requiring 1/8 x 1/8 = 1/64 of the memory. During sampling, only the VAE decoder is needed.

Stable Diffusion uses the CLIP text encoder. (But as Imagen has demonstrated, probably any sufficiently large text-only LLM can be used).

Latent diffusion leads to faster training and sampling because we’re now working in the latent—instead of pixel—space. This leads to lower cost which leads to more experiments. The lower memory requirement also allows sampling run on consumer-grade laptops, putting text-to-image generation in the hands of regular hackers.

We started with how diffusion can generate images from noise. Then, we saw how text conditioning enabled prompt-based image generation via autoregressive transformers and cross-attention, even using text encoders that weren’t trained on text-to-image tasks. Finally, we learned how guidance helps with generating images that are more aligned with the text prompt though at the cost of image diversity.

The space of text-to-image has progressed rapidly since I started deliberately studying it. Two weeks ago, NVIDIA released eDiff-I which uses an ensemble of diffusion models. And we haven’t touched on text-to-video (e.g., Facebook’s Make-A-Video, Google’s Imagen Video) and text-to-3d (e.g., Google’s DreamFusion, NVIDIA’s Magic3D).

Unfortunately, we can’t discuss all of them here (mostly because I don’t have the spare time and energy 😅). Nonetheless, I hope these fundamentals will help with your understanding of text-to-media generation and its future advances.

Did I misunderstand or misrepresent any of the concepts or papers? If so, please reach out!