Reinforcement Learning for Recommendations and Search

Most recommendation systems learn user preferences and item popularity from historical data, to retrain models at periodic intervals. This comes with a few downsides.

Multi-armed bandits are a form of classical reinforcement learning. They try to balance exploration and exploitation by exploring new actions to learn what the potential reward is, and then exploiting the current best action to maximize reward. The goal is to learn about and choose actions that maximize total reward (aka minimize regret).

Contextual bandits take it a step further—they collect and observe the context before each action, and choose actions based on the context. They learn about how actions and context affect reward. In the case of recommendations and search, the context would be data we have about the customer (e.g., demographics, device, indicated/historical preferences) and environment (e.g., day of week, time of day).

Yahoo shared about using a contextual bandit for recommending news articles. While regular bandits only learn on features specific to each arm (i.e., disjoint linear models), their approach uses features—such as user-article cross features—that are shared across all arms (i.e., hybrid linear models). Experiments showed that this allowed click-through rate information from one article to be learned and applied to other articles (i.e., transfer learning)—this was not possible with disjoint linear models.

Evaluation was tricky as they only had offline data that was collected via a different policy (i.e., another recommender was in production when the data was collected, aka off-policy evaluation). Thus, they assumed that individual events were independent and identically distributed, and that the policy used to gather the logged data chose each arm uniformly at random. (They had a “learning bucket” to which some users were randomly assigned to. Users in the learning bucket were served articles randomly.)

They started with a (non-contextual) multi-armed bandit to find the single best artwork for all users. Then, it progressed to contextual bandits to personalize images for each user. The bandit can choose from a set of images for each show (i.e., action) and observe the number of minutes the user played the show after being impressed with the image (i.e., reward). It also has information about user attributes (e.g., titles played, genres played, country, language preferences), day of week, time of day, etc. (i.e., context).

They shared several bandit models, such as a greedy policy (via supervised regression model), epsilon greedy, LinUCB, and Thompson Sampling but weren’t specific about which was used in production (probably an ensemble or something that’s updated frequently). The evaluation approach was similar to Yahoo’s—I’ve written about it in more detail here.

JD shared about using deep Q-networks (DQN) and negative feedback for e-commerce recommendations. They shared that items that users skip (i.e., not click) provide useful signal about user preferences and should also be incorporated into recommender systems—a system with only positive items will not change its state or update its strategy when users skip the recommended items.

Thus, they defined the state of their Markov decision process (MDP) to include negative items. Their MDP has two separate states: State+ (previous N items that users clicked or purchased) and State- (previous N items that users skipped). For the transition, if users click/purchase the recommended item, State+ is updated by not State-; if users skip the item, State- is updated but not State+.

As input for the DQN, gated recurrent units (GRUs) encode the sequence of positive and negative events into S+ and S- embeddings. These embeddings are then concatenated with the candidate item (a). The first few hidden layers (for S+ and S-) are separated, the intuition is that we want to recommend items similar to the clicked/purchased items, but different from the skipped items. Thus, separating the first few hidden layers helps with capturing the distinct contributions of the positive and negative feedback. 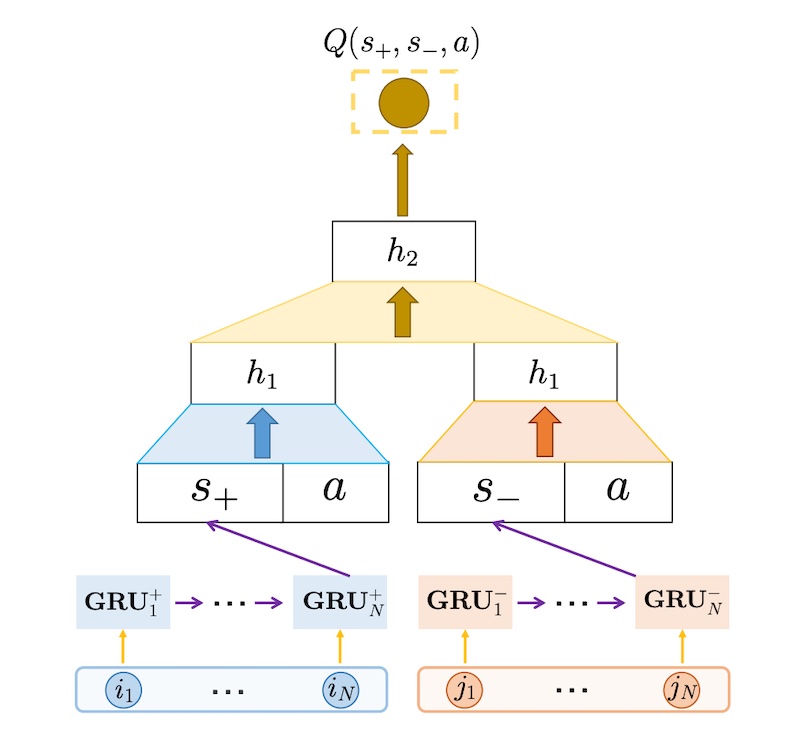 To reduce computation cost, they have a prior candidate retrieval step that reduces the search space. Candidates are selected by finding the N most similar items for the past M items that users clicked and purchased. These candidates are then passed into the DQN as potential actions for ranking.

Microsoft also adopted a DQN for news recommendations. For features, they had: 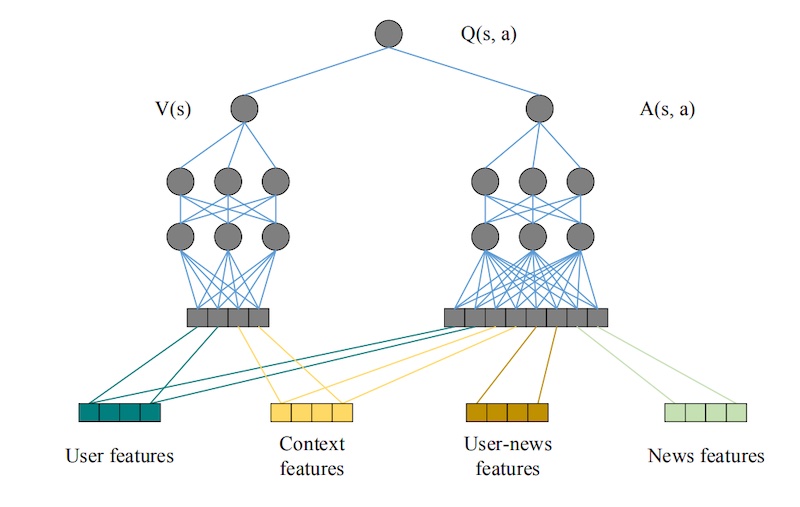 For reward, they combined (immediate) click-based reward and (long-term) user activeness reward. They reasoned that click metrics are only part of user feedback, and that recommendation systems should also consider whether the user will return to the application. User activeness was modeled via survival models and combined with click reward to get total reward. Nonetheless, user activeness reward had a low weight of 0.05.

For exploration, they applied dueling bandit gradient descent. Two networks are used to create recommendations: the current network Q and the exploration network Q’. Weights of Q’ are obtained by adding some noise to the weights of Q. The recommendations from Q and Q’ are then interleaved before being served to users. If the items recommended by Q’ get better feedback, the agent updates Q towards Q’. Otherwise, Q remains unchanged. 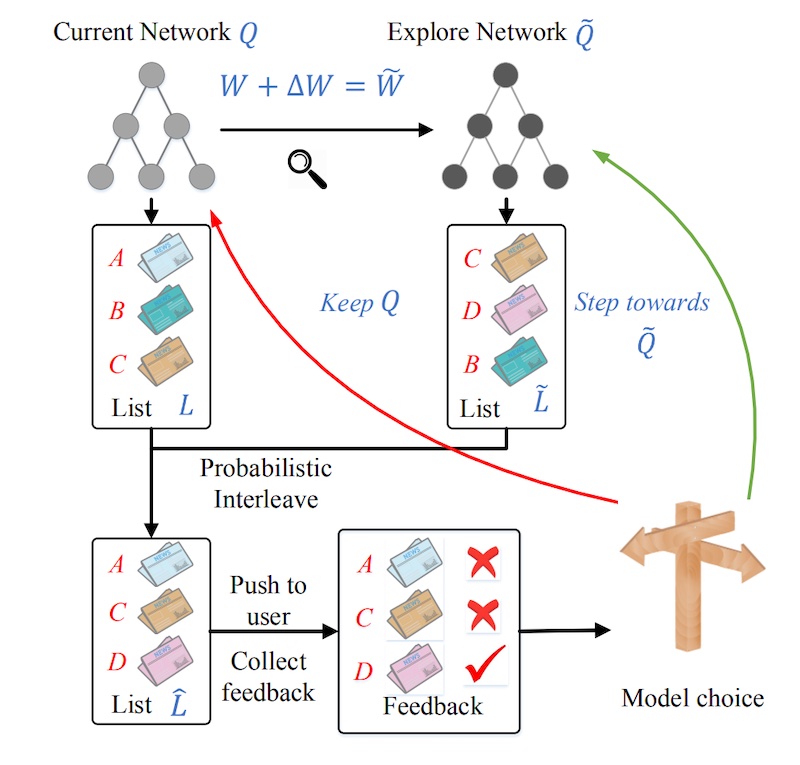 Their recommendation DQN considers the browsing history of items and ads separately. These item and ad sequences go through two GRUs to encode recommendation and ad preferences (similar to JD’s approach), before being concatenated with the context (e.g., app version, operating system, feed type)—this represents the state. Potential actions (i.e., item recommendations) are represented via embeddings. Given the state and a list of possible actions, the DQN outputs the Q-value of each state-action pair.

The advertising DQN is tricker. It needs to return three outputs: whether or not to include an ad, which ad to insert, and which position to insert it. However, these outputs are interdependent and a traditional DQN wouldn’t work. Thus, they designed a novel DQN that outputs the Q-value, specific to an ad, for all possible locations. They also added another unit in the final layer (index=0) to represent the Q-value of not inserting an ad. This design lets the DQN consider the state and action and return all three outputs in a single pass. 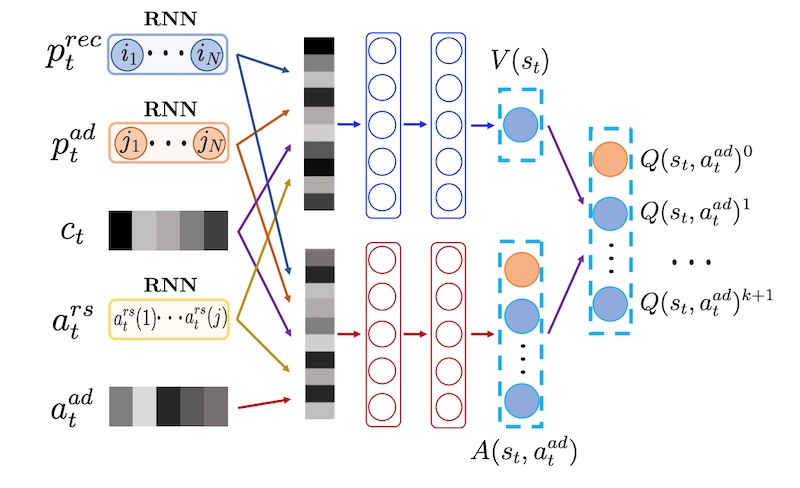 Similar to Microsoft’s approach, the Q function is separated into value and advantage functions, where the value function doesn’t consider the ad input. The DQN outputs the Q-value of all ad-location pairs, a proxy for long-term influence of ads on user experience. This is then sent to the bidding system which trades off between immediate ad revenue and long-term Q-values.

Relative to value-based methods, policy-based methods learn the policy function that maps the state to action directly, without having to learn Q-values. As a result, they perform better in continuous and stochastic environments (i.e., no discrete states or actions) and tend to be more stable, given a sufficiently small learning rate.

Google shared about using REINFORCE for YouTube recommendations. The input is the sequence of user historical interactions, while the output predicts the next action to take (i.e., which video to recommend).

For the main policy (π), the input sequence is embedded via an RNN. They tried a variety of RNNs (e.g., LSTMs, GRUs) and ended up using a Chaos Free RNN due to its stability and computation efficiency. The RNN takes in the sequence of user events up till time step t and encodes it into the user state for the next time step (t+1). This is then concatenated with the context of time step t+1.

The final softmax layer predicts the probability of each action (i.e., videos to recommend)—this is similar to a previous implementation which also had a softmax output layer. Given that the softmax contains millions of possible actions, they adopt sampled softmax during training. During serving, approximate nearest neighbors (ANN) is applied to retrieve the top actions. 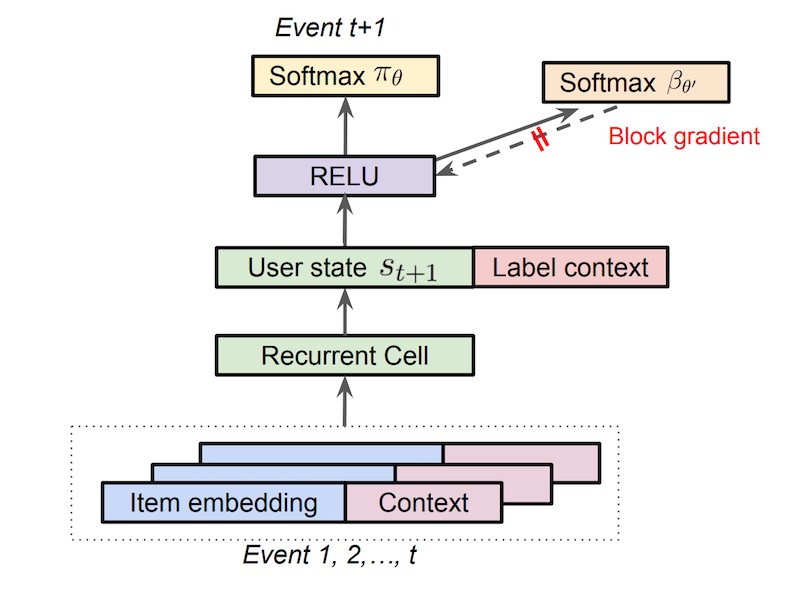 Boltzmann exploration was used to minimize the negative impact on user experience. They shared that brute force exploration (e.g., e-greedy) was not viable as it could result in inappropriate recommendations and poor user experience. After the top M candidates are retrieved via an ANN, the logits (unscaled distances?) are fed into a smaller softmax to normalize the probabilities before sampling from the distribution. Exploration and exploitation are balanced by recommending the top K most probable items and sampling the rest from the remaining M - K items.

Actor-critic combines the best of value-based and policy-based methods by splitting the model into two, one for computing the action based on state, and another to produce the Q-value of the state-action. The (policy-based) actor takes state as input and outputs the best action, learning the optimal policy and controlling how the agent behaves. The (value-based) critic then evaluates the action by computing the value function and providing feedback, to the actor, on how good the action is.

I came across several examples of actor-critic used in recommendations and search. We won’t be discussing them in this piece and I recommend you read them as required.

Are you trying to apply reinforcement learning for recommendation problems? If so, contextual bandits might be a good place to start—they’re relatively simpler to implement and might not need as much data as deep learning approaches. Beyond contextual bandits, DQNs seem to be the go-to baseline.

Nonetheless, regardless of which approach you adopt, pay extra attention to how off-policy evaluation is done—having the right evaluation framework is more than half the battle won. Here’s a good tutorial on counterfactual evaluation. Also, see this paper on Simpson’s Paradox in offline evaluation for recommendations.

Did I miss anything? Please reach out!