RecSys 2020 ran from 22nd - 26th September. It was a great opportunity to peek into some of the latest thinking about recommender systems from academia and industry. Here are some observations and notes on papers I enjoyed.

There was increased emphasis on ethics and bias this year. Day 1’s keynote was “4 Reasons Why Social Media Make Us Vulnerable to Manipulation” (Video) while Day 2’s keynote was “Bias in Search and Recommender Systems” (Slides).

Two (out of nine) sessions were on “Fairness, Filter Bubbles, and Ethical Concerns” and “Unbiased Recommendation and Evaluation”, discussing papers such as:

We also saw an increased shift towards sequence models (with SASRec (2018) and BERT4Rec (2019) being common benchmarks) and bandit and reinforcement learning for recommender systems:

There was also a (controversial?) talk by Google refuting the findings of a previous paper where learned similarities via multi-layer perceptrons beat the simple dot product.

Of course, I also enjoyed the many papers sharing how organizations built and deploy recommender systems in the wild (more here).

User research on the nuances of recommendations

In contrast, users have lower expectations in 1:many recommendations (e.g., a slate of recommendations), such as when the user is browsing. In the example below, “Queer Eye” might seem far removed from “Million Dollar Beach House”. But with the other recommendations in the slate, it makes sense within the overall theme of reality shows.

The two findings suggest there’s no one-size-fits-all approach for recommendations. Recommenders developed for the home page/email (low user effort) might not work similarly if placed on the detail page or search page. Also, 1:1 and 1:many recommendations should be built and evaluated differently.

Netflix also highlighted the importance of understanding users’ context. After finishing a reality show, users are likely to watch another reality show, right? Not necessarily. Netflix found that consecutive reality show watching happened only 18% of the time.

There are many contexts where similarity is not required or can worsen recommendations. For example, users might want a change of pace or mood from that horror movie they just watched. Also, does the user stick to a specific genre (e.g., Korean dramas) or hop around diverse genres? A better understanding will help improve the user experience.

Pablo Castells from the Autonomous University of Madrid shared about how different target sampling approaches affect offline evaluation. There are three ways of creating validation targets: With no unrated data, with all unrated data, and somewhere in between.

The relative performance of models differ when considering all unrated vs. no unrated labels.

They also ran several experiments on the MovieLens 1M dataset and demonstrated that the relative [email protected] performance differs with and without unrated data.

The relative performance of recommenders differ with and without unrated data.

Zhu Sun from Macquarie University examined 85 papers on implicit feedback-based top-N recommendations published in the past three years. Their paper gave a good overview of the different factors that could affect recommendation systems such as data pre-processing (and how data is excluded), objective functions, negative sampling, data splitting approaches, and evaluation metrics.

Among the 85 papers, they found inconsistencies on:

Pigi Kouki from Relational AI highlighted one key failing in offline evaluation metrics: They penalize a model if it does not predict the same product (i.e., identical product ID). Thus, near-identical products—which a human might consider relevant—are not counted as hits. She then shared about their two-step offline evaluation process when building a recommender system.

First, they trained 15 models and selected five which performed best in offline evaluation:

In the second step, human experts evaluated the recommendations from the five models. 10 experts evaluated the model across three categories in the home improvement domain. The experts had access to title, description, image, and links to the product. They could rate the recommendation as objectively relevant 👍, subjectively relevant ✅, or irrelevant 👎. 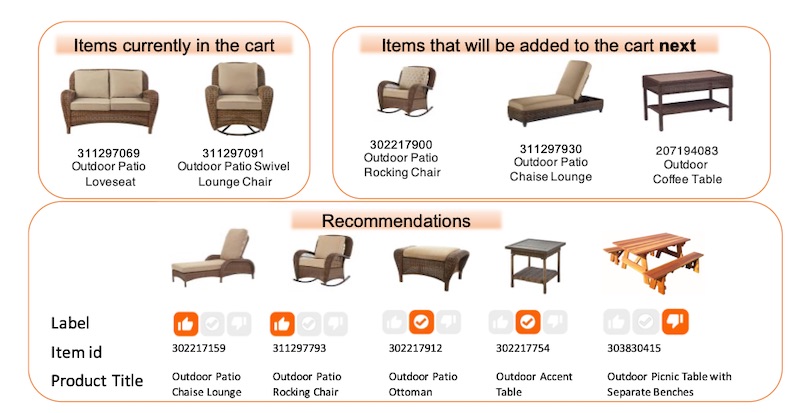 STAMP and GRU4Rec performed best in the second step and STAMP was put through an A/B test. This led to a 15.6% increase in CTR and an 18.5% increase in revenue per session.

Overall, these papers made me rethink my experimentation and offline evaluation workflow. Furthermore, offline evaluation of interactive machine learning systems (e.g., recommendation, search) is tricky as we can’t observe how user behaviour will change.

Walid Krichene from Google revisited (and overturned) the findings from the neural collaborative filtering (NCF; 2017) paper in his talk Neural Collaborative Filtering vs. Matrix Factorization Revisited.

In the original NCF paper, a multi-layer perceptron (MLP) was suggested to replace the dot product. This was based on experimentation results (where MLP was superior) and the universal approximation property. 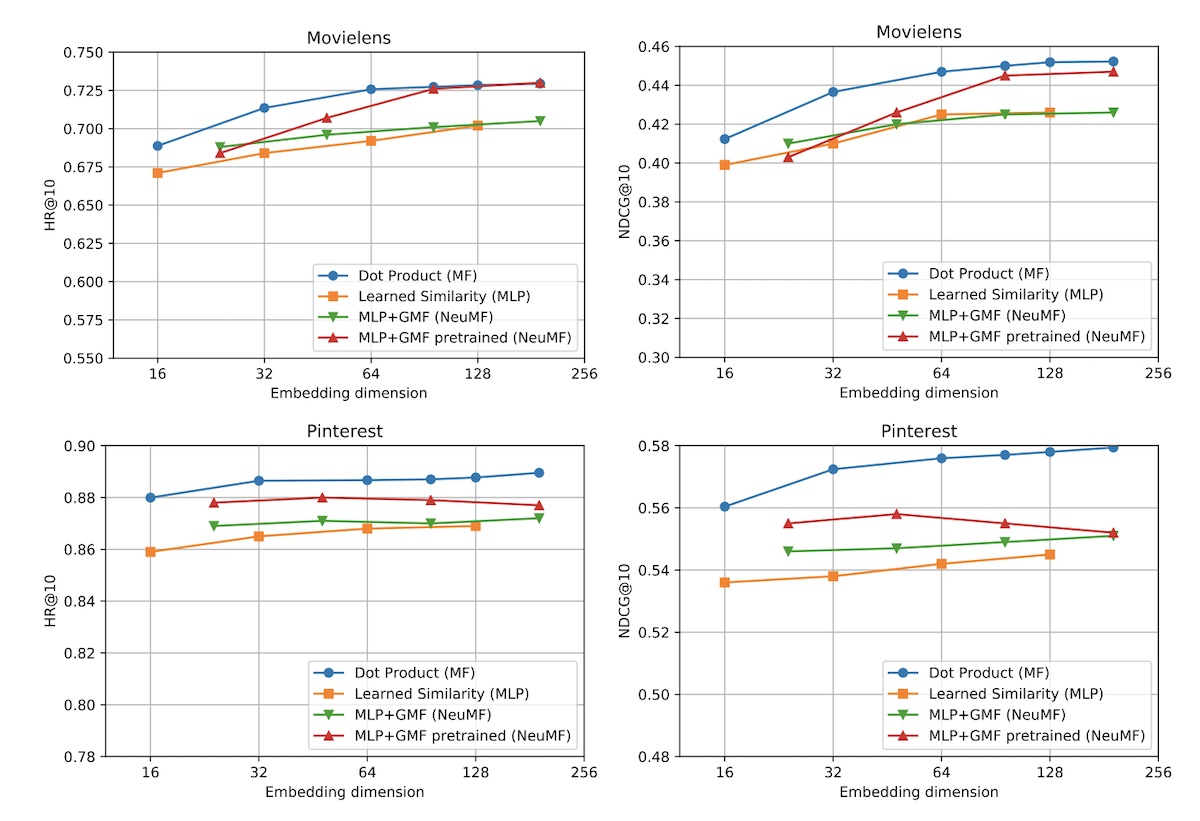 For the current paper, the team ran multiple experiments on the MovieLens 1M and the Pinterest dataset. They found the dot product to be superior to learned similarity approaches (MLP and neural matrix factorization). 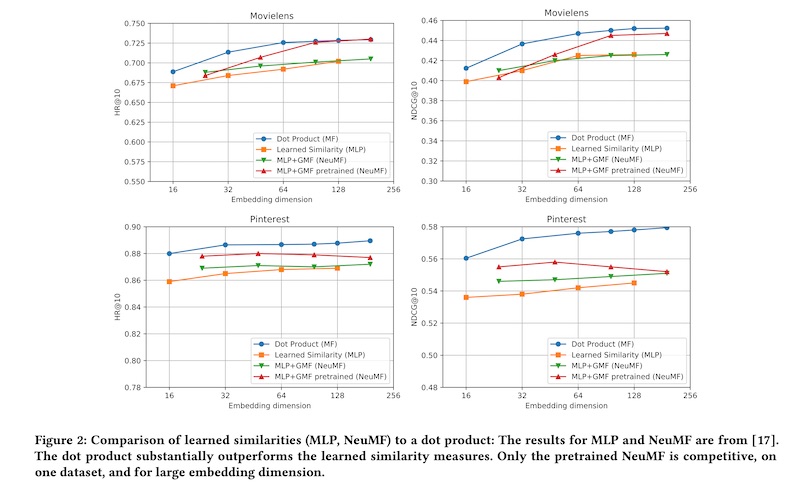 When asked, Walid suggested that one possible reason was better hyperparameters. They found the matrix factorization parameters in the original NCF paper under regularized. Another possible reason could be the addition of explicit biases that have been empirically shown to improve model performance.

The paper also highlighted the practical advantages of the dot product, where retrieval can be done efficiently (linear complexity vs quadratic complexity for MLP). The dot product also doesn’t need to be learned. Thus, for most applications, the dot product should be the default approach.

(Note: In a previous paper, Google had also demonstrated that MLPs/feed-forward networks were inefficient in capturing multiplicative interactions.)

Moumita Bhattacharya from Etsy shared about their two approaches to integrate search query as context into their content-based recommender (image below). The goal is to include user intent (i.e., search query) and seasonality in candidate generation. 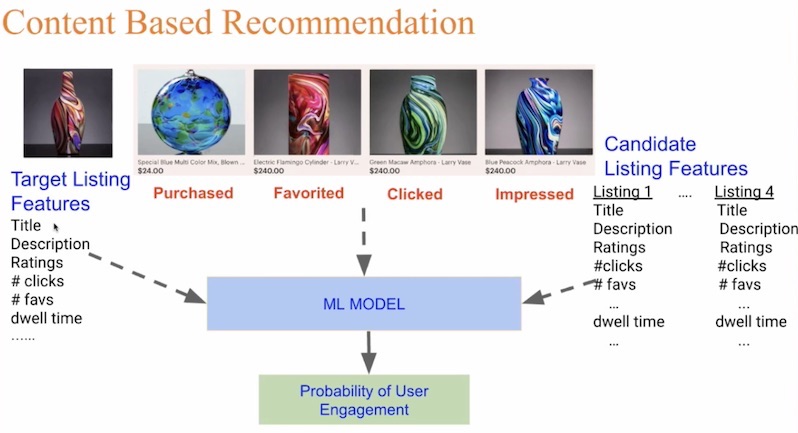 For their first approach, they extracted top N queries associated with each listing and then trained embeddings for items and queries. With these embeddings, candidates were generated via approximate nearest neighbours. However, this did not work as well as the second, simpler approach. 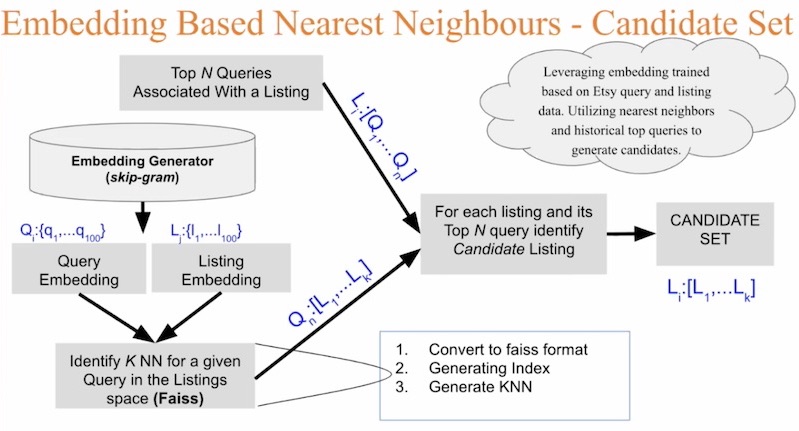 Here’s their second approach: For each search query, a set of items would be shown to the user (i.e., search results)—these are the target items. Then, for each target item, other items the user interacted with (in the same search session) become candidate items. Thus, for each query-target pair, they would have a set of candidates. 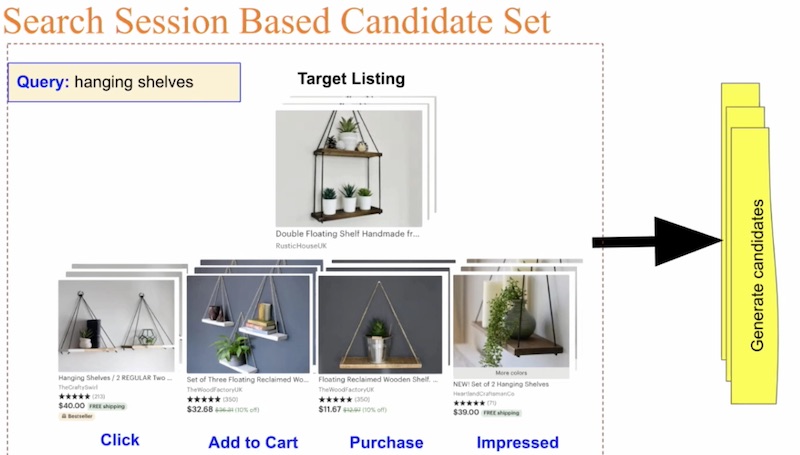 Together with a ranker (applied after candidate generation), they improved recall by 12.42% in offline evaluation. In online evaluation, it increased click-through rate by 8 - 23% and conversion rate by 0.25 - 1.16%.

Casper Hansen from the University of Copenhagen shared how Spotify learns user preferences based on session history and the current context. Specifically, by using the sequence of past sessions and the context (at the start of each session), can they predict which tracks will be played in a new session and context?

Users played music in a variety of contexts (time, device).

They used an RNN-based architecture to jointly learn from historical sequences and context. The key was to fuse the context-dependent user embeddings and long-term user embeddings using attention weights.

Two separate models were implemented, one for relevancy and one for unexpectedness.

Benjamin Chamberlain from Twitter shared how it’s a bad idea to use default parameters for Word2vec-based recommendations. They quantified the extent of this with experiments on hyperparameter tuning and evaluated on [email protected] and [email protected] 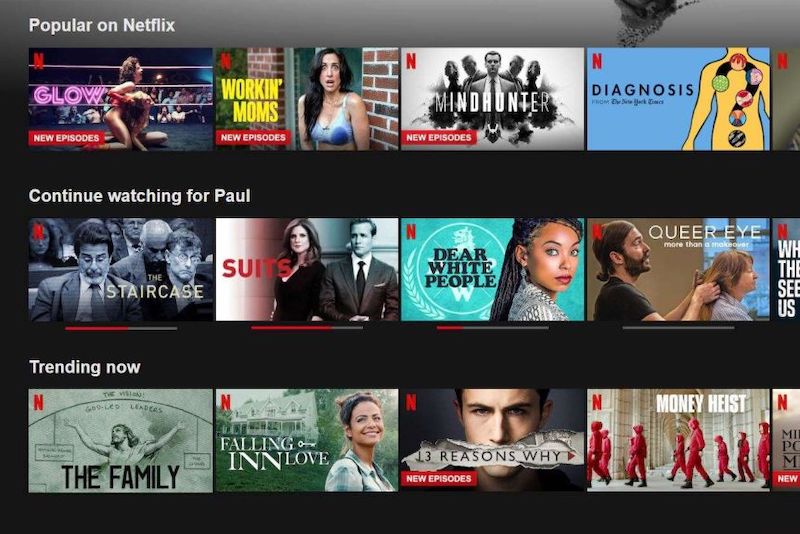 They demonstrated a way to learn state embeddings by using the distribution of items making up the slate. This is done by summarizing the items in the slates using the mean and covariance matrix of the item embeddings.

By incorporating slate embeddings, they improved on the winning submission for the RecSys 2019 challenge (predicting accommodations clicks in Trivago search results).

Ramanathan R from SBX Corporation shared their approach for building a reciprocal recommender system for a matchmaking app. Recommendations for matchmaking are challenging for the following reasons: 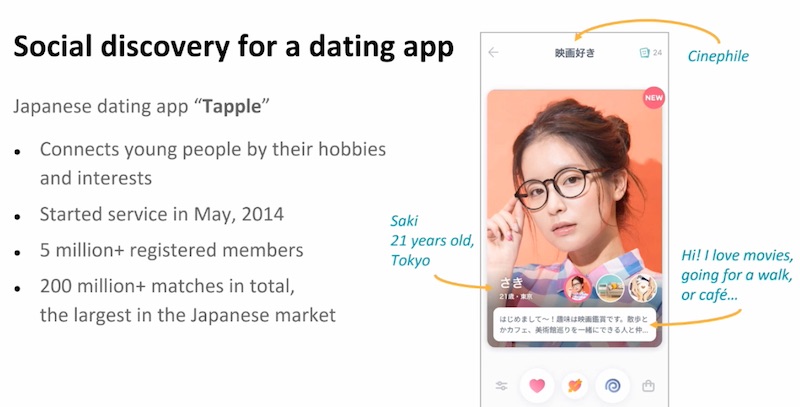 To learn user embeddings, they used historical match data. If both users liked each other (i.e., match), this was assigned a positive label; if only one user liked (and the other user rejected or ignored), this was assigned a negative label. For new users, pseudo-embeddings were generated based on existing users with similar metadata (e.g., location, interests). These user embeddings were then used in candidate generation.

An interesting challenge was the mismatch between offline and online evaluation. This was due to some recommended users being inactive (e.g., previously matched or stopped using the app). Inactive users did not reciprocate the like, leading to no match/conversion. This was fixed by adding a re-ranking step to have a balance of relevant, new, and active users.

RecSys2020 (22-26 Sep) gave a peek into recent ideas on recommenders from academia & industry.

Thanks to Yang Xinyi and Karl Higley for reading drafts of this.

« Appreciating the Present Is Writing as Important as Coding? »